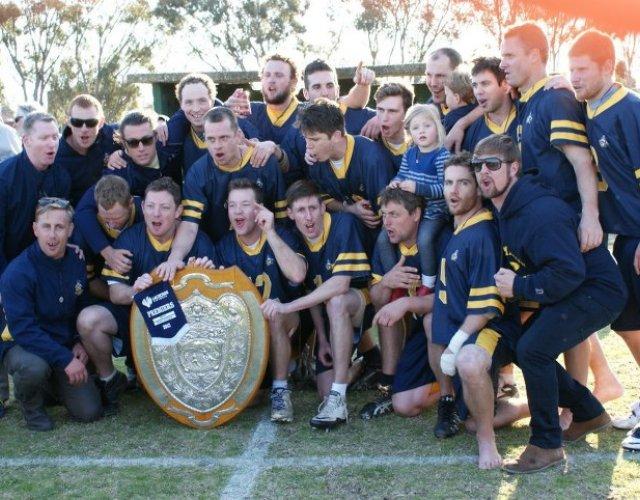 After an incredible year both on an off the field at WLC brought about a lot of hard work and dedication the club experienced something that may not have occurred since the 1930s (we are still checking the record books) when every Senior team and the Under 18s won their respective Grand Finals.

The slightly overcast but warm September day started off with the Under 18s, Coached by Steve Pike with assistance from Eric Jenney, defeating the Southern Supremes 14-13 in an epic match. Sean Clarke who stepped up from under 16s sealed the win inside the last 30 seconds with his first goal of the day. Alex Pike, who was also named league MVP scored 7 goals in the rousing victory.

Up next was Division Three who, after giving the rest of the league a three-week head start, finished the season undefeated and on top of the ladder with Malvern being their main rival. True to form it was Malvern that had to be confronted in the Grand Final and consistent with the rest of the season our boys gave them a 4 goal head start, trailing at every break until a huge final quarter saw the Blue and Gold power home to a 13 – 8 final score.

Division Two, anchored by new goalkeeping convert Adam Dobson, fielded possibly the most talented ‘thirds’ team to ever set foot on a Victorian lacrosse field. Recent State League players, Shea Menzies, Josh Ardossi, Dan Garnsworthy and Troy Christensen teamed up with former and future stars against local rivals Altona. The A’s showed plenty of vigour but were never in the hunt as the Fearons led 12 – 4 at half time and ran away with the win 20 – 9. Shea Menzies starred on attack with 5 goals and was helped by Willy getting constant first use of the ball through midfielders Michael Kindred and Andy Errington, while the solid defence of Ross Speakman, Corey Richardson, Steve Millar and Matt Ryley held firm all day and kept Altona out of the game.

Division One stepped out against a young Moreland side eager to continue the Williamstown Division One Grand Final hoo-doo. Despite constant strength in numbers, Williamstown’s Division One had not held the cup since the year 2003. This year, with renewed interest from full-time coaches Mark and Alan Lewer the club was determined to not only support State League but to win the flag in its own right. After a dominant season there was never any doubt as a 14 – 2 half time lead rolled into a 23 – 2 full time drubbing. Ash Wilkinson and Jourdan Smith shot 6 and 5 goals respectively while Under 18 stars Alex Pike and Noah Jenney shot 3 and 2. The old firm of Darren Gibson and Al Lewer also shot 3 a-piece. Nathan Barrett was superb in defence not allowing Moreland so much as a sniff.

With all teams getting the job done early in the day it remained for State League to hold up their side of the bargain to complete the historic ‘clean sweep’. And, after the disappointment of losing to Surrey Park in the 2011 Grand Final, the Fearons had a point to prove against the old rival in Malvern who themselves had surprised the league by topping Surrey Park to make the Grand Final. Malvern, who were appearing in their first finals campaign since 2002 were high on confidence as they came into the game however Willy were quick out of the blocks through goals to Darren Nicholas, Daniel Jennings, Kyle Morlang and Troy Butson taking the Fearons to a 5 – 1 quarter time lead. A rock solid first half from defence and midfield ensured the Williamstown attack had the majority of the time on attack and despite Malvern’s goalkeeper standing tall Willy led 11 – 5 at the main break. From here Willy was never headed by Malvern who stuck to their game plan and scored a volley of late goals but to no avail as Williamstown rolled out 18 – 10 victors and regaining the Joel Fox Shield for the fourth premiership in 5 seasons.

The whole club from the newest under 12 players and parents to the most experienced supporters should be congratulated on what has been an incredible year. We are a very fortunate club but we make the most of our fortune with hard work and commitment, much of which goes unseen and unrewarded.

It’s time to enjoy the results of that hard work and come back fresh in 2013 with new aims, new goals and a commitment to growing this sport and ensuring the success of our great club.